Vidal ain’t got nothing on him.

Around September of last year I attempted my first (and last) braidout. My husband helped to braid my hair, and after showing him one time how to braid, he proceeded to braid better than I could. I should have known it wasn’t a fluke.

Saturday I decided that I needed to go to the bowels of hell (aka Wal-Mart) get get some headbands. I tend to lose mine. He was hungry so we decided to eat while we were out.

My hair was twisted up, and I needed to untwist it. He wasn’t doing anything but watching a bad 1980’s movie, so I enlisted his help. “This will go much faster and get us out of the house sooner if you help.” He asked me what to do. I told him to just untwist them. “Do I untwist them all the way?” I was kind of confused by his question, but told him yes. He sat there and quietly and gently untwisted the back of my hair while I did the front. I got finished before him and just sat there and waited. “I’m finished.” I went to the mirror to go check. Dear God in heaven. He untwisted each twist, and spread the hair evenly over my head so that my afro was freaking adorable!

My husband is a 28 (almost 29) white male who never touched a head of hair on an African American woman before me. I just look at him sometimes, amazed at what he does. He just tells me “I’m just good with my hands.” I keep telling him that if he ever gets sick of being a network engineer, he should go to school to be a beautician. He just rolls his eyes at me and goes back to his movie while I get dressed.

I love this man. 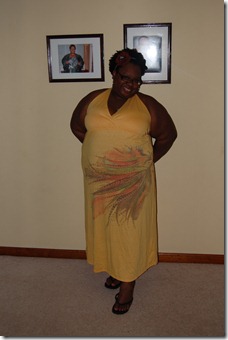 My hair after he got finished with it!